december 09, 2016
My students in year two are having a written test on Animal Farm. It is based on talks we´ve had while working our way through the novel together for the past three weeks. Given the complexity of the story, however, the focus in a written test like this naturally has to be narrowed down. Next year, when I may be using the novel again, the test may look quite differently. 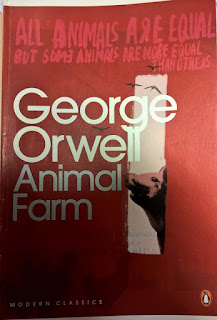 2. Napoleon´s leadership
Explain how and why Napoleon outmanouvres Snowball on the farm - and how he benefits from his absence afterwards.

Even though we do not live in a dictatorship in Sweden, could you think of examples of how our minds are being twisted even in our contemporary society?